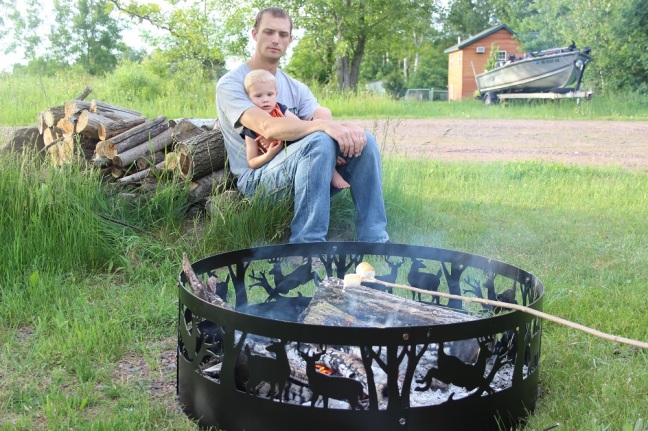 I stared down at this 13 year old asking me to be his dad. He was serious. I scrambled for words that would straighten out his world a little bit and yet not let him down too far. Both parents worked and his dad seemed to either be gone driving truck or home sleeping. I guess I was Bret’s only adult friend.

I have a skill that did not come easy (very quiet and shy through high school). My hard fought and practiced skill is talking to perfect strangers and being their friend, if only for 30 seconds in the grocery store line. I intentionally practice this skill to this day. It’s easier if they are wearing fishing or hunting T-shirt.

Bret wandered by my house several times a day it was not long in saying Hi and smiling. This led him into my garage to help fix the car or hook up the boat and do a lot of talking about Bret. There was a lot bottled up inside this little man and I merely popped the top off the bottle.

I probably knew more about Bret’s interests, friends, hopes and dreams in a few encounters than his parents or siblings. He met our family in the yard over a homemade ice cream cone and I began to bring him home so he would not stay at our house too long. I was beginning to be his parent teaching him values, time management (“time to get home Bret”) and drawing lines (“do you want to become like your friend Jack? I could visit you behind bars on Thursdays!”). Bret was learning how to think and make decisions on a junior high level. I like to think I took off his training wheels in that department.

I have a dad (and mom) who knew how to be Dad as Parent and Dad as friend. The relationship was intentional, planned and well executed from the cradle through college. As time went on Dad and Mom prayed very hard for wisdom beyond what they could muster for all seven of their kids (That is probably why we survived some of our choices). Dad was pure parent until age 12 when he began to take his hands off my decision making steering wheel. I had to begin making choices and be responsible for them. There was plenty of talk time about those little choices and how I would have much bigger ones as I aged. I was responsible for choices and reaped the consequences (good or bad) in chores, handling money, school sports and even developing my own personal quiet time with God.

Over an ice cream cone, I told Bret that as the oldest, his parents were really trying hard to make a home for him and his siblings. When his dad was gone he was man of the house and they needed him to mow the grass, help his mother with the house and maybe make some of his own money mowing the neighbor’s lawns and doing odd jobs for people. I also told him that his dad needed him to be his friend. “Talk to him, find out his hopes and dreams, ask how you can help be the man of the house when he is gone”.

Bret was quiet when I took him home. I suspect Bret made some choices after that day. He did not roam the neighborhood as much. I had turned him down as dad. I suspect good came of this odd friendship as Bret’s mom was driving by one day and stopped at the end of our short drive. “I just have to say thank you for being Bret’s friend”. We moved not long after.

Wherever you are Bret, I hope you have learned how to be a Dad Parent and a Dad Friend to your kids. I also hope you have developed a relationship with the God of the universe like we talked about.

A look at life

Please enjoy my stories and pictures. I hope to live life to it's fullest and help all I meet along the narrow paths I have taken through Life. Feel free to comment. Thanks for visiting this site. It will be a work in progress. I also have an outdoors blog of pictures, wilderness trips, and possibly some wisdom for campers at www.garyfultz.com