I’m trying to decide if I really want to pick some of these Norway Spruce cones, heat them in the oven so they open up and allow me to harvest the seeds. Then I will plant them in starter boxes and transplant them around my place. The female cones have about 200+ seeds per cone. I’m sure there are over 50 cones per tree so you see where this simple undertaking could lead. The cones are 25 feet up the tree but I have an old rickety ladder that might reach one rung at a time. Yearly goals are like this I guess. Do I really want to do this? Is my ladder good enough? Some of my many 2019 questions.

So many seeds, so little time. Maybe enough resources? However, these young (as trees go) 35 foot trees each came from one good seed planted in good soil and grew. Seems worth the risk. 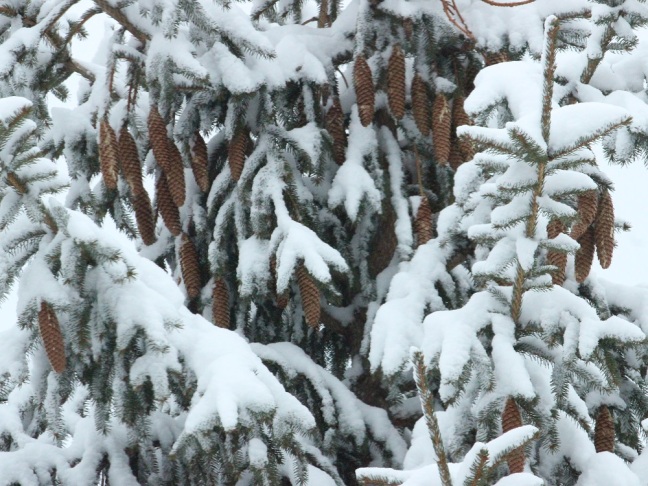 SO… fellow bloggers, speakers and readers: May 2019 be a year where your words are as the cones of the Norway Spruce in my front yard. Housing thousands of precious seeds capable of growing a huge forest. reachable one solid rung at a time as you climb your ladder to the harvest. Whatever your goals may be there is a ladder to climb.

So reach for those cones and take care of those seeds. Plant them in soil you have prepared in us….those you connect with.

Oh, make sure your ladder is good…is there a verse for that?

To many this would be sacrilege. but to those who have realised they just escaped hell, sacred.

I came a stranger, a visitor and casual observer. I left immersed in wonder.

The place was packed. The air as electric with excitement as a tied championship game in final seconds. Yelling, clapping and (very) loud cheering sounds from young and old alike. God winning. Testimony and story from several teens, twenties and some elderly as they declared hardships and victories before being dunked in an icy water filled cattle tank. Tears and much shaking of heads as memories of who they were “before Christ”. Gods power was evident, powerful, overflowing and permeating. All were participants in this sacred gathering.

Thirtysome quick stories and baptisms before moving on to thirtysome child dedications. The electricity was still there. Clapping, yelling and various carrying on continued as parents gave their kids to God and pleaded with the people to help them raise their kids to Love God. Not a dry eye in the place as a mom gave her child to God. “Before Christ”, Strung out on drugs at life’s bottom she had given away her young child for adoption.  Now in her new life in Christ, she was now giving her child to God. A child she may never see again on earth. She desperately wanted to at least see her child in heaven someday.

[Side notes: extremely organized, the youth band was great but their drummer is an alien with six arms I think. How could over 70 events happen with people talking and take only 2 hours? Wow, they didn’t come for the cake afterwards! I still feel compelled to pray once in awhile for the barren mom with purple and pink hair. So this is where my grandkids are being raised…]

There was nothing ordinary about this afternoon church service.  God wasn’t just “talked about”, God permeated the room and the people with his presence. A sacred excitement. We were there with His Spirit. I could  picture Jesus in the eyes of the little kids standing on chairs clapping with glee. The year was 2018. I shall not forget this sacred moment.

PS: a bit of irony on the backstory. This meeting was held in a nice church building given to this ministry. Seems the church grew old and disbanded from lack of people and funds. This ministry grew out of that church a few years back but was attracting people that made the church people uncomfortable. Now that ministry is a church and the old church building is just big enough for the youth ministry. God wins.

A look at life

Please enjoy my stories and pictures. I hope to live life to it's fullest and help all I meet along the narrow paths I have taken through Life. Feel free to comment. Thanks for visiting this site. It will be a work in progress. I also have an outdoors blog of pictures, wilderness trips, and possibly some wisdom for campers at www.garyfultz.com